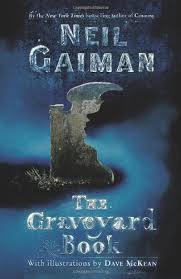 After the grisly murder of his entire family, a toddler wanders into a graveyard where the ghosts and other supernatural residents agree to raise him as one of their own.

Nobody Owens, known to his friends as Bod, is a normal boy. He would be completely normal if he didn't live in a sprawling graveyard, being raised and educated by ghosts, with a solitary guardian who belongs to neither the world of the living nor of the dead. There are dangers and adventures in the graveyard for a boy. But if Bod leaves the graveyard, then he will come under attack from the man Jack—who has already killed Bod's family...

Beloved master storyteller Neil Gaiman returns with a luminous new novel for the audience that embraced his New York Times bestselling modern classic Coraline. Magical, terrifying, and filled with breathtaking adventures, The Graveyard Book is sure to enthrall readers of all ages.

THERE WAS A HAND IN the darkness, and it held a knife.

The knife had a handle of polished black bone, and a blade finer and sharper than any razor. If it sliced you, you might not even know you had been cut, not immediately.

The knife had done almost everything it was brought to that house to do, and both the blade and the handle were wet.

The street door was still open, just a little, where the knife and the man who held it had slipped in, and wisps of nighttime mist slithered and twined into the house through the open door.

The man Jack paused on the landing. With his left hand he pulled a large white handkerchief from the pocket of his black coat, and with it he wiped off the knife and his gloved right hand which had been holding it; then he put the handkerchief away. The hunt was almost over. He had left the woman in her bed, the man on the bedroom floor, the older child in her brightly colored bedroom, surrounded by toys and half-finished models. That only left the little one, a baby barely a toddler, to take care of. One more and his task would be done.

He flexed his fingers. The man Jack was, above all things, a professional, or so he told himself, and he would not allow himself to smile until the job was completed.

His hair was dark and his eyes were dark and he wore black leather gloves of the thinnest lambskin.

The toddler’s room was at the very top of the house. The man Jack walked up the stairs, his feet silent on the carpeting. Then he pushed open the attic door, and he walked in. His shoes were black leather, and they were polished to such a shine that they looked like dark mirrors: you could see the moon reflected in them, tiny and half full.

The real moon shone through the casement window. Its light was not bright, and it was diffused by the mist, but the man Jack would not need much light. The moonlight was enough. It would do.

He could make out the shape of the child in the crib, head and limbs and torso.

The crib had high, slatted sides to prevent the child from getting out. Jack leaned over, raised his right hand, the one holding the knife, and he aimed for the chest…

…and then he lowered his hand. The shape in the crib was a teddy bear. There was no child.

The man Jack’s eyes were accustomed to the dim moonlight, so he had no desire to turn on an electric light. And light was not that important, after all. He had other skills.

The man Jack sniffed the air. He ignored the scents that had come into the room with him, dismissed the scents that he could safely ignore, honed in on the smell of the thing he had come to find. He could smell the child: a milky smell, like chocolate chip cookies, and the sour tang of a wet, disposable, nighttime diaper. He could smell the baby shampoo in its hair, and something small and rubbery—a toy, he thought, and then, no, something to suck—that the child had been carrying.

The child had been here. It was here no longer. The man Jack followed his nose down the stairs through the middle of the tall, thin house. He inspected the bathroom, the kitchen, the airing cupboard, and, finally, the downstairs hall, in which there was nothing to be seen but the family’s bicycles, a pile of empty shopping bags, a fallen diaper, and the stray tendrils of fog that had insinuated themselves into the hall from the open door to the street.

The man Jack made a small noise then, a grunt that contained in it both frustration and also satisfaction. He slipped the knife into its sheath in the inside pocket of his long coat, and he stepped out into the street. There was moonlight, and there were streetlights, but the fog stifled everything, muted light and muffled sound and made the night shadowy and treacherous. He looked down the hill towards the light of the closed shops, then up the street, where the last high houses wound up the hill on their way to the darkness of the old graveyard.

The man Jack sniffed the air. Then, without hurrying, he began to walk up the hill.