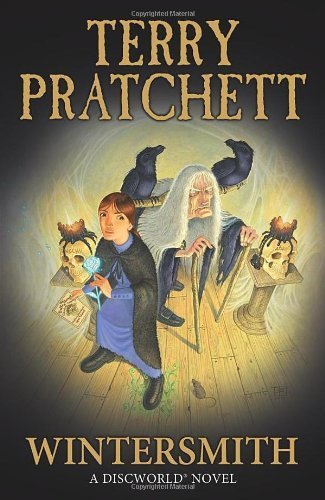 Tiffany Aching is a trainee witch — now working for the seriously scary Miss Treason. But when Tiffany witnesses the Dark Dance — the crossover from summer to winter — she does what no one has ever done before and leaps into the dance. Into the oldest story there ever is. And draws the attention of the Wintersmith himself.

As Tiffany-shaped snowflakes hammer down on the land, can Tiffany deal with the consequences of her actions? Even with the help of Granny Weatherwax and the Nac Mac Feegle — the fightin’, thievin’ pictsies who are prepared to lay down their lives for their “big wee hag.”

Wintersmith is the third title in an exuberant series crackling with energy and humour. It follows The Wee Free Men and Hat Full of Sky. 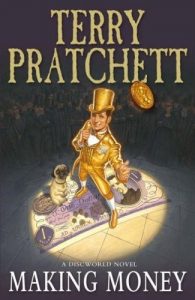 No sky should hold as much snow as this, and because no sky could, the snow fell, fell in a wall of white. There was a small hill of snow where there had been, a few hours ago, a little cluster of thorn trees on an ancient mound. This time last year there had been a few early primroses; now there was just snow. Part of the snow moved. A piece about the size of an apple rose up, with smoke pouring out around it. A hand no larger than a rabbit's paw waved the smoke away. A very small but very angry blue face, with the lump of snow still balanced on top of it, looked out at the sudden white wilderness. "Ach, crivens!" it grumbled. "Will ye no' look at this? 'Tis the work o' the Wintersmith! Noo there's a scunner that willna tak' 'no' fra' an answer!" Other lumps of snow were pushed up. More heads peered out. "Oh waily, waily, waily!" said one of them. "He's found the big wee hag again!" The first head turned toward this head, and said, "Daft Wullie?"

"Did I no' tell ye to lay off that waily business?"

"Aye, Rob, ye did that," said the head addressed as Daft Wullie. "So why did ye just do it?"

"Sorry, Rob." Rob Anybody sighed. "But I fear ye're right, Wullie. He's come for the big wee hag, right enough. Who's watchin' over her doon at the farm?"

"Wee Dangerous Spike, Rob." Rob looked up at clouds so full of snow that they sagged in the middle. "Okay," he said, and sighed again. "It's time fra' the Hero." He ducked out of sight, the plug of snow dropping neatly back into place, and slid down into the heart of the Feegle mound. It was quite big inside. A human could just about stand up in the middle, but would then bend double with coughing because the middle was where there was a hole to let smoke out. All around the inner wall were tiers of galleries, and every one of them was packed with Feegles. Usually the place was awash with noise, but now it was frighteningly quiet. Rob Anybody walked across the floor to the fire, where his wife, Jeannie, was waiting. She stood straight and proud, like a kelda should, but close up it seemed to him that she had been crying. He put his arm around her. "All right, ye probably ken what's happenin'," he told the blue-and-red audience looking down on him. "This is nae common storm. The Wintersmith has found the big wee hag—noo then, settle doon!" He waited until the shouting and sword rattling had died down, then went on: "We canna fight the Wintersmith for her! That's her road! We canna walk it for her! But the hag o' hags has set us on another path! It's a dark one, and dangerous!" A cheer went up. Feegles liked the idea of this, at least. "Right!" said Rob, satisfied. "Ah'm awa' tae fetch the Hero!" There was a lot of laughter at this, and Big Yan, the tallest of the Feegles, shouted, "It's tae soon. We've only had time tae gie him a couple o' heroing lessons! He's still nae more than a big streak o' nothin'!"